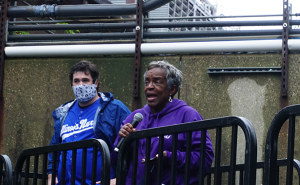 Recently, SEIU Local 73 union leaders have discovered that UIC is bringing in workers from out of state to cross the picket line. These out-of-state workers are coming from Texas, Tennessee, Nevada, and Mississippi, all of which are currently listed on the City of Chicago’s COVID Emergency Travel Order. This action calls into question UIC’s commitment to a fair contract, as it goes directly against one of the main bargaining issues, universal COVID-19 protections. At the moment, SEIU 73 does not know whether any of these out-of-state workers were tested for the virus, let alone conducted the mandatory quarantine period for states reflected on the travel order.

“UIC is bringing in workers from states with higher COVID-19 transmission rates to break a strike from a workforce complaining that management risks worker and patient lives due to inconsistent COVID-19 safety protocol enforcement, “ said Dian Palmer, SEIU Local 73 President. “We want to come to an agreement that is fair and just for UIC workers, but we’re also ready to strike. UIC workers are not only fighting for their livelihoods, but for their lives, the safety of their families, and the communities being served.”

UIC continues to drag its feet when it comes to COVID-19 protections and economics. Though SEIU Local 73 has had positive discussions about a $15/hour minimum wage, UIC has not agreed to fully comply with Chicago’s minimum wage law, nor have they promised the resources and protections needed to keep UIC workers, their families, and the community safe. By bringing in workers from states on the travel order, it is putting Chicago and its hospitals at risk while alienating their workers. If no agreement is reached, UIC workers will begin striking on Monday, September 14 at 6am. SEIU Local 73 has filed unfair labor practices over UIC’s conduct during negotiations. There has been no resolution to the claims and the union has moved forward with the intention to strike in its efforts to resolve the unfair labor practice charges and other worker concerns.

“This is making me and my coworkers upset. You’re telling me you don’t have the money for us? But you have $1200-$3,000 per week to bring in others from another state that’s considered a hot spot? That’s a slap in the face. Even with the money aside, I can’t spend it if I’m dead. You call us essential workers, but you’re putting our lives at risk by not giving us universal testing and protections and bringing in potentially infected people,” says Building Service Worker Monica Jones.

About 4,000 clerical, professional, technical and service & maintenance workers work at the main campus in Chicago, the University of Illinois Hospital and Health and Sciences System, Peoria, Rockford, Champaign, and UIC Specialized Care for Children. The professional unit went on strike in 2012. The other units have not gone on strike in recent times.

On Monday, September 14 at 6am workers will walk off the job and join the Illinois Nurses Association in withholding their work until a fair contract is reached with the university’s management.