“This is dumb, wrong, vengeful and unnecessary,” said CTU President Jesse Sharkey. ”This policy is a form of collective punishment—essentially punishing poor schoolchildren who rely on those meals. Today is June 1 and the rent is due. Even as those same families struggling with mass unemployment are struggling to pay their rent, now they have to figure out another way to feed their children. The mayor must reverse this terrible decision immediately.”

“Chicago Public Schools’ decision to suspend grab-and-go meal sites for students is a mistake,” said SEIU Local 73 President Dian Palmer, whose members have been shouldering much of the responsibility for food distribution at public schools during the pandemic. “The thousands of families that are being impacted by this misguided move were just left to find another way to feed their children. CPS support staff, represented by SEIU Local 73, call on CPS and Mayor Lightfoot to reverse this decision. We are in a moment of crisis with COVID-19 affecting our most vulnerable communities in Chicago and the anger caused by the murder of George Floyd. We must find ways to heal each other and provide basic needs like food to feed our most vulnerable children — exactly what’s needed for us to move forward together.”

CPS, whose board and top administrators are hand-picked by Mayor Lightfoot, made the move after a second day of protests in the wake of George Floyd’s murder by white police officers, a day that also saw looting in some neighborhoods. Some local grocery stores that serve as the only source of food in neighborhoods that confront chronic food deserts are among the damaged stores.

“Our students need MORE support today, not less,” said Sharkey. “Instead, the mayor continues to de-prioritize the needs of people who live in South and West Side neighborhoods where people are dying at much greater numbers from COVID-19. Cancelling food service and suspending or reducing public transit service is cruel. Tens of thousands of families are confronting massive unemployment. This policy needs immediate reversal. These policies are exactly the kind of racist disinvestment and dispossession that people are protesting.”

The unions are coordinating with grassroots neighborhood groups and organizations that include Jobs With Justice/Chicago to support emergency mutual aid efforts to get food to students in need. 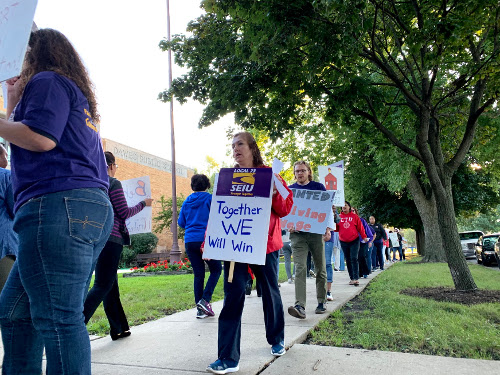