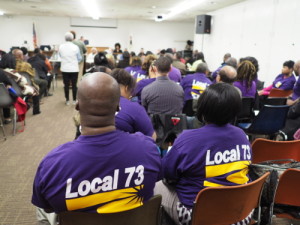 We’re celebrating a few of the victories that come with finding justice for members, as we aim to protect their benefits, secure back-pay, fight for better wages, win arbitration cases, and more.

Do you have win you’d like to share with us? Let us showcase how we’re Stronger Together.

PL , a former mental health counselor at Regional Health Systems Mental Health Center in Hammond, IN, was terminated after management accused him of unprofessional behavior with a client.

The Union argued that management did not conduct a sufficient investigation into the allegations made against PL, and that they relied solely on hearsay evidence to justify his termination at his arbitration hearing. On September 13, 2019, the Arbitrator sustained the Union’s grievance, and ordered Regional to reinstate PL and make him whole for his November 2018 termination without just cause.

MR, an aviation security officer with the City of Chicago Department of Aviation, was given a 20-day suspension when management accused him of failing to block an entrance gate while also manning the entrance booth.

On August 30, 2019, the Arbitrator found that the Department of Aviation failed to provide clear rules and instructions to MR, and ordered the Department to reduce MR suspension to a 10 days and reimburse him for 10 working days missed as a result of the harsh suspension.

CB, a clerk with the Cook County Recorder of Deeds, was terminated for allegedly engaging in workplace violence, including an exaggerated allegation that he had “battered” a co-worker when Lysol sprayed by CB in the restroom accidentally landed atop his co-worker’s head. CB denied ever engaging in workplace violence. The Arbitrator ordered that CB be immediately reinstated to his former position with the Record of Deeds office on August 12, 2019.

“I’m glad everything went smoothly and in a timely manner,” says CB, who also appreciated the support that SEIU Rep Paula Haley gave him. “SEIU aimed to get everything fully restored, and fulfilled that promise.”

“From the start, SEIU had the right approach.”

CR, a 20-plus-year painter at the University of Chicago Medical Center, was terminated for violating workplace aggression policy for allegedly pulling a co-worker out of his chair and onto the floor.  The arbitrator found that the level of discipline was far too severe for the action that CR actually engaged in and reduced the termination to a 30-day suspension.

“Union members should absolutely take advantage of the resources SEIU has,” says CR. “[General Counsel] Daniel Zapata and Elizabeth Towell were instrumental in getting my issue resolved.”

We’re proud of these wins by the in-house legal department, Alyssa Busse and Daniel Zapata.

We’re proud of these wins and are ready to continue supporting and serving our members. Need assistance?  The Member Action Center (MAC) connects you with a well-trained, professional union representative, who can provide advice and assistance to union members for work site issues, contract questions, or grievances.