On Thursday, September 24, workers ended an 10-day long unfair labor practices strike at the University of Illinois-Chicago after 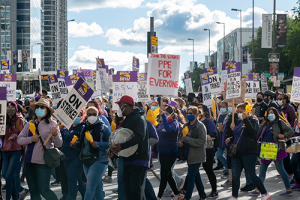 reaching tentative agreements that provide workers with COVID-19 protections and pay increases.  The agreements with the administration are for multi-year contracts for four bargaining units represented by SEIU Local 73 at the Chicago, Rockford, and Peoria campuses, including building services workers, technicians, clerical positions, and professionals.

The contract provides pay increases for all workers, including a $15 minimum wage in Chicago for those on the lowest payscale, better health and safety protocols for COVID-19, increased staffing, and protections against outsourcing good union jobs.

“This is a victory for all working people in Illinois and shows what’s possible when workers unite and demand that employers respect us, protect us and pay us,” said Dian Palmer, SEIU Local 73 President. “I am so proud of the Black and Brown women who led this strike, who convinced their co-workers striking was worth the risk. They never gave up. They were out there at dawn every day demanding justice for essential workers. UIC called them heroes but their pay and benefits didn’t reflect that, but UIC now understands what it means to be essential.”

“We are leaving the picket lines victorious in so many areas,” said Alicia Uwumarogie, physical therapist and SEIU Local 73 bargaining committee member. “We have gained the confidence and strength to take on management. We have demonstrated our collective power through the execution of this strike. Our members will be loud and proud about this win and what we did in these past few weeks. We will continue fighting until justice, fairness, equity, and respect, become the standard at UIC.”

Nearly 4,000 SEIU Local 73 UIC workers launched an unfair labor practices strike on Monday, Sept. 14, demanding UIC “respect us, protect us, and pay us” after more than a year’s worth of contract negotiations have failed. Workers from across UIC campuses provide a wide variety of services to students and patients ranging from building services workers who clean bathrooms to occupational therapists to people who work with children with special needs to hospital support staff.

“I’m elated with everything that we’ve accomplished — we won in so many ways,” said Lavitta Steward, Program Services Aide and SEIU Local 73 bargaining committee member. “The university did not, prior to this contract, have any respect for our union. The university did not expect for us to unite and come together. The university tried to divide us with an injunction. But what they did was unified us, they made us strong, they gave people the courage to fight for themselves and each other. We will not be taken lightly again, and that is an amazing victory for us.”

The tentative agreements reached by SEIU Local 73and the UIC administration includes:

The tentative agreements must be approved by SEIU Local 73 members in a ratification vote, which is expected to take place the week of September 28. More details to follow.

Community leaders and local lawmakers supported striking UIC workers by speaking at the picket lines and joining them at marches, rallies, and press conferences.