Local 73 members worked to get local elected officials to sign a letter to the Illinois Congressional delegation asking for the aid to state and local governments.  We got 50 elected officials to sign in 4 days – Democrats and Republicans.  The House passed a bill – called the HEROES Act – which provides funding for state and local government.  The U.S. Senate, led by Sen. McConnell, has chosen not to act on the legislation.

The Illinois budget makes the required pension payment, avoids layoffs, avoids budget cuts to higher education and Secretary of State, increases funding to local governments and K-12 education. Also in this year’s Illinois budget, SEIU Local 73 members who work in state funded facilities which serve developmentally disabled won their $1.50/hour raise.  This much-needed wage increase for frontline caregivers will come in two stages – $1/hour on July 1, 2020 and the additional $.50 on January 1, 2021.  These jobs are low paying jobs and he members have been on the frontlines during the COVID pandemic.

The third big breakthrough for SEIU Local 73 members was the passage of HB 2455 which removes the prohibition against non-instructional education employees receiving unemployment benefits when they are laid off during the 2020 summer months. That means thousands of SEIU Local 73 members who work for school district and universities will be able to qualify for Unemployment Insurance (UI) benefits this summer. And because of a recent change in federal law, UI benefits will be increased by $600/week through the end of July.

SEIU Local 73 worked in coalition with many other organizations to support the passage of a law making it easier to vote this year.  No one should have to risk their life in order to exercise their right to vote.  SEIU Local 73 supported Senate Bill 1863 which provides the following:

All these voting changes are significant and provide easier access for anyone concerned about contracting COVID-19.

To briefly review this state legislative session – there are no cuts to pensions, Medicaid, higher education or Secretary of State budgets; an increase in local government funding; an increase in K-12 funding; a raise for members working with the developmentally disabled; workers will have easier access to workers compensation if they become ill with COVID-19; the first ever access to unemployment insurance for laid off educational employees during the summer; and expansion of voting access. 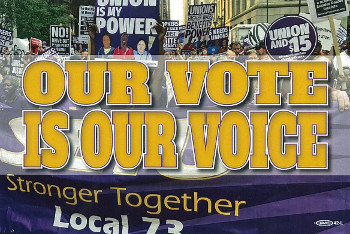