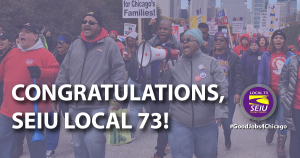 After nearly 17 months of negotiations and a seven-day strike, the members of SEIU Local 73 overwhelmingly voted in favor of a new five-year contract with Chicago Public Schools  (CPS) Wednesday, winning substantial pay increases, significant improvements in working conditions, and more resources for students.

The newly ratified contract is a start in creating a pathway out of poverty for many of the workers that Mayor Lightfoot called ‘chronically underpaid.’ For example, under the current contract, it would take 17 years for a new SECA to reach $40,000 per year. Under the new contract, beginning in 2023, SECAs can reach $40,000 in one to two years.

“This is a victory for working people in Chicago and shows what is possible when we unite and take action,” said Dian Palmer, president of SEIU Local 73. “The lowest-paid support workers who are the backbone of our schools are going to see raises that mean their families won’t have to struggle as hard living in an expensive city where costs keep going up.”

The contract is also a victory for schools, especially for special education students. For the first time, Special Education Classroom Assistants will have self-directed prep and planning time scheduled throughout the school year.  The contract will also support SECAs’ dedication to special education students, protecting them from being used as utility workers and from being used for the general student population rather than their assigned students.

“I am proud of what we have been able to accomplish together for the sake of our families, our students and our schools,” said Jonathan Williams, a special education classroom assistant at Wilma Rudolph Learning Center and a member of the bargaining team. “We want to provide our kids the education they deserve in an environment that is clean and safe. This contract will help us to better serve and advocate for our students and will help us support our families.”

The agreement comes after 97% of support staff voted to authorize a strike in June after working without a contract since June 30, 2018. Tired of the disrespect and seeking a path to a better life for their families and better support for students, members went on strike October 17 along with members of the Chicago Teachers Union (CTU).

SEIU Local 73 stands in solidarity with CTU, whose members remain on strike, and is  encouraging all members to honor CTU picket lines.

Summary of the ratified contract includes:

The newly ratified contract includes the following specific benefits and changes for each job category: